The SOUTH AUSTRALIAN REGIONAL RAIL ALLIANCE (SARRA) is made up of a group of regional South Australians who believe that SA would benefit from the return of regional rail passenger and rail freight services on rail lines effectively abandoned over the past 4 decades by successive State governments.

This site records the maladministration and a lack of responsibility that successive State governments have given to this issue and how those governments have failed in their duty of care to regional South Australians.  We ask that you explore this website and take part in our efforts to revive and revitalise regional rail in SA.

Below are some of our latest comments and revelations you should be immediately aware of - please follow the links for further information.

NOTE THAT FOR THE BEGINNING OF 2020, PLEASE REGARD THIS WEBSITE AS A 'LIBRARY' WHERE DETAILS OF SARRA'S EFFORTS TO REINSTATE RAIL PUBLIC TRANSPORT AND FREIGHT SERVICES OVER RECENT TIMES HAVE BEEN CHRONICLED AND CAN BE FOUND UNDER THE 'DROP DOWN' TAGS AT THE TOP OF THIS PAGE.  FOR CURRENT INFORMATION ABOUT OUR ACTIVITIES AND OTHER INFORMATION ON THE 'DUCKING AND WEAVING' OF THE VARIOUS POLITICAL PLAYERS IN THIS ONGOING SAGA, PLEASE CLICK HERE TO GO TO OUR FACEBOOK PAGE, WHERE UP-TO-DATE INFORMATION WILL BE MADE AVAILABLE ON A ROLLING BASIS.
FOR THOSE INTERESTED IN OUR TRAIN CHRISTMAS PRESENTS TO SA TRANSPORT MINISTER STEPHAN KNOLL, WE HAVE MOVED THOSE STORIES TO THEIR OWN PAGE.  CLICK HERE TO VIEW!
KNOLL'S ELECTORATE 'SUMMER NEWS' LETTER IS RELEASED - BUT DON'T EXPECT ANY GOOD NEWS ON THE BAROSSA WINE TRAIN!
The Member for Schubert Stephan Knoll (aka the anti-rail Big Controller) has released his Summer newsletter, which hit postboxes across the Barossa today (Feb 20) - but with NOTHING in it on the debate for the return of the Barossa Wine and Commuter train - a hot topic of discussion in the community and local press over recent weeks. There was one tiny mention of the soon-to-disappear rail track through Kroemer's Crossing however...."The rail corridor will continue to be preserved....and there's nothing stopping the return of a rail service in the future." (!!) Of course, SARRA argues that the track should be replaced as part of the roundabout development - cheaper now for the State Government than at some time in the future.

The newsletter released today is shown bottom left - but note the inset!  This was where most of them ended up! (the inset photo was taken of the rubbish bin outside the Williamstown Post Office...)

....so we thought we'd help out the Big Controller and produce the front-page we'd all like to see (bottom right). This would get your newsletter read, Stephan - and your electorate would applaud you!
MINISTER PUSHES THE 'PR' BUTTON TO PROP UP 'ON DEMAND' BUS SERVICES IN THE BAROSSA VALLEY AND MOUNT BARKER..... 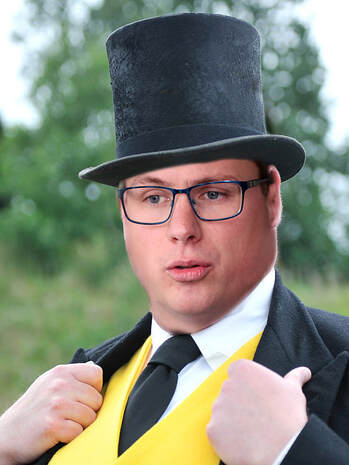 State Transport Minister Stephan Knoll (and currently the Member of Schubert which embraces the Barossa) has put PR spin on the on-demand bus services currently being trialled in the Barossa and Mount Barker....and guess what!  It's all 'sweetness and light'!

Well, that's not what we're hearing 'on the ground', certainly in the Barossa.  The service is only being trialled in what we might call the 'central' (or inner) Barossa.  It doesn't extend nor connect with the outer areas of the region - or provide a connector to rail services to Adelaide.  This is a service devised by someone who most definitely is 'pulling the strings' from interstate and has a very limited view of our region.  We can only presume therefore that the 'greater' Barossa area is not deemed to be profitable for its operators.  Say no more!

BUT SARRA argues that public transport IS A RIGHT and does NOT depend on 'profitability'.  It is a service, to the public - not a 'cash cow' for its operators. Public Transport is the responsibility of the STATE - not a 'plaything' to be given away to private enterprise.

​Thus this 'trial' is NOT a real effort to provide the Barossa area with meaningful public transport - it's just PR to win the Liberal Government 'brownie points'!  "...LOOK! WE'RE DOING SOMETHING WHEN WE'RE DOING BUGGER ALL....!"
See the original Knoll PR poster, below left - then check out our take on a real 'reality poster', below right!!

JOHN GEBER CALLS FOR THE BAROSSA TRAIN LINE TO BE REINSTATED 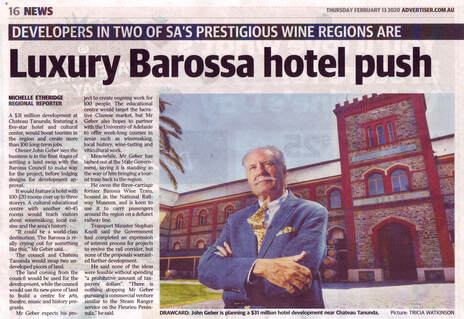 The owner of the iconic Chateau Tanunda winery and tourist attraction, John Geber, has publicly lashed out at Transport Minister Stephan Knoll (also the local MP for the Barossa) for not doing enough to make the Barossa line operational.

Mr Geber revealed his big plans for tourism in the Barossa in The Advertiser, plans which include a $31 million 5-star hotel and cultural centre in the centre of Tanunda. AND he wants to see a train-line to the Valley to bolster tourism to the area.  Mr Geber was interviewed about it by Jules Schiller on the ABC 891's Drive program on Thursday February 13 - a segment to which SARRA contributed.  Schiller says he's going to pursue Knoll on the matter next week - time will tell whether Knoll will take part.  In the meantime, hear the Schiller segment below!
THE OVERLAND IS SET TO BE ABANDONED (if the SA Government gets its way) thanks to a lack of care and interest by the Fat Controllers on North Terrace.  Here's our take (tongue firmly-in-cheek) on the debacle below.....
WOW! THERE'S LOTS BEEN GOING ON OVER THE SILLY SEASON WHEN OUR POLITICIANS THINK WE'RE NOT LOOKING!

​Knoll declares train services to the Barossa 'dead' - the sale of GWA appears to be up in the air - and Labor makes an effort to save The Overland!  It's been an interesting start to 2020. See details below....

Genesee & Wyoming Inc. announced on December 30 the completion of its previously announced sale to affiliates of Brookfield Infrastructure and and the Singaporean sovereign wealth fund, GIC. As a result, G&W’s common stock ceased trading on the New York Stock Exchange and will no longer be listed for trading on the NYSE.

SARRA contacted GWA’s public relations’ consultancy for comment (see the response from GWA at THE BOTTOM of this article). In the meantime, taking into account the views of contractual and legal experts with whom we earlier discussed the (then impending) sale of G&W, the following issues (and opportunities!) present themselves - and now the sale has gone through, need answering.

First, let us quickly refresh our followers and those new to this site about G&W Australia…


THE POINT IS - what now for these abandoned rail lines in SA following the sale of G&W, the parent company?

In the lead-up to the GW sale it was publicly stated that GWA’S minor partner MIRA (Macquarie Investments - the Australian investment conglomerate) would buy GW’s stake in GWA - and that MIRA would be the new owner of the company (along with a Dutch Pension Fund).

THEN it was announced that GWA was being taken to court by Aurizon (Australia’s largest rail freight operator), claiming a 2006 deal gave it first dibs on any sale of GWA. The outcome of that action - or indeed whether the case is still proceeding - is not known at this time.

Below are (some of) the questions SARRA wants answers to, on behalf of the taxpayers of SA:

​ ​ ​ ​
AND A CLEAR STATEMENT AND WARNING TO THE STATE GOVERNMENT: NOW GWA NO LONGER EXISTS AS A CORPORATE ENTITY, THE SA GOVT NOW RESUMES OWNERSHIP OF THE STATE'S REGIONAL AND RURAL RAIL LINES.  ON BEHALF OF THE TAXPAYERS OF SA, SARRA CALLS ON THE STATE TO TAKE LEGAL ACTION AGAINST GWA (or its new owners) TO MEET THE COST OF REINSTATING SA'S ABANDONED RURAL RAIL LINES (as it is/was required to do under the Lease)  AND FURTHER, TO DEVELOP A PLAN TO REINVEST IN AND REINVIGORATE REGIONAL AND RURAL RAIL-FREIGHT AND RAIL PASSENGER SERVICES.

IF THE STATE WISHES TO PASS ON THE OLD LEASE TO THE NEW OWNER, IT CANNOT DO SO WITHOUT MAKING THE TERMS OF THE LEASE PUBLIC SO THAT THE LINE'S OWNERS, THE SA TAXPAYERS, CAN BE FULLY INFORMED OF AND HAVE INPUT INTO THE AGREEMENT THOUGH ITS REPRESENTATIVES, THE MPs AND MLCs OF STATE PARLIAMENT.

[THE RESPONSE FROM GWA received from its public relations consultancy on January 8, 2020:

"An announcement was made on the 30 December 2019 notifying the completion of the sale of Genesee & Wyoming Inc (G&W) to affiliates of Brookfield Infrastructure and GIC.   The completion of the acquisition of Genesee and Wyoming Australia (GWA) by Macquarie Infrastructure and Real Assets (MIRA) and PGGM is expected to be completed during Quarter 1, 2020, once all conditions to the acquisition are satisfied or waived.  An announcement will be sent out upon completion of the sale. All operations and business continue as normal."

GO FIGURE!]
NEW YEAR'S DAY BLAST FOR THE MARSHALL GOVERNMENT FROM THE COUNCIL ON THE AGEING OVER ITS (SO FAR) REFUSAL TO SUPPORT THE CONTINUANCE OF THE OVERLAND TRAIN SERVICE

If you're new to the threat to The Overland train commuter service between Adelaide and Melbourne, read the stories below - then come back here to hear an interview conducted by the ABC 891's Breakfast presenter Spence Denney with the CEO of the South Australian Council for the Ageing (COTA), Jane Mussared, on New Year's Day.

Denney spoke to Mussared following his interview on New Year's eve with Transport Minister Stephan Knoll - an illuminating piece laying bare the Marshall government's total lack of understanding and 'don't give a toss' attitude to the thousands of commuters who use The Overland - and the need to revitalise regional and rural rail more generally.

If you haven't heard the New Year's eve interview, go to the 'lack of grasp' story below - then, as we said, come back here to hear COTA's view.  Another burning branch under the posterior of the Transport Minister!
SA TRANSPORT MINISTER STEPHAN KNOLL SHOWS HIS LACK OF GRASP OF HIS PORTFOLIO BY DENYING THE OVERLAND IS A COMMUTER TRAIN
Those following our efforts to get the SA Government to keep The Overland train service running after March of this year (see the stories below) will continue to be astonished but not surprised by Transport Minister's Stephan Knoll's total lack of understanding of the importance of the service.

Led by bad advice from his Department DPTI (headed by a former CEO of The Overland's operator) and a lack of understanding of government's responsibility to ALL taxpayers (not just those living on the 'Northern Connector' or the pie-in-the-sky South Road Tunnel), Knoll's policy stance on The Overland 'thumbs its nose' to thousands of South Australian commuters who use The Overland to travel back and forth to Melbourne (and stops in between).

The ABC 891's Morning presenter, Spence Denney, called him to task over his views (along with the plight of elderly drivers, and his views on rural road 'patch-overs') in an extended interview on December 31, 2019.  If you haven't caught up with The Overland issue so far, see the stories below....then listen to Denney's latest interview with the Minister by clicking on the audio below...

(note: edited from the extended interview, for the sake of relevance to this issue - runs 14 minutes.)
NEWS FLASH - 20 Dec 2019!
SARRA understands from its sources that the Victorian Government is about to announce that it will continue to fund The Overland service through to the end of March 2020.

If this is so, this is good news - albeit a small 3-month lifeline, as welcome as it is, for the 130 year old service.

Details of what happens beyond March 2020 may be included in the announcement from the Victorians, which, we understand, may be made later today.​ 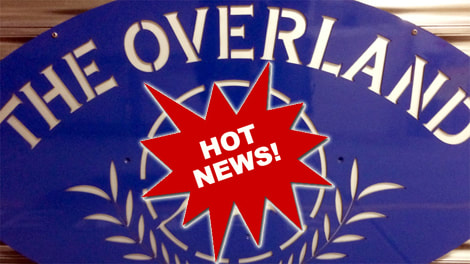 If the reprieve is on, it gives us THREE MONTHS to bring serious pressure on the anti-rail SA Marshall Government to play its part by providing the funding to carry the service forward for another 12 months.

As you all know, only $300,000 is required - this, at a time when the Marshall Government has just promised some $10m to launch the questionable intra-regional ‘Uber-bus’ experiment (which has failed elsewhere) and $20m to prop up the dying horse-racing industry! Remember, you heard it first from SARRA!
gtag('config', 'UA-108743719-1');