THE OVERLAND THROWN ANOTHER LIFELINE BY THE VICTORIAN GOVERNMENT - BUT HAS THE COVID CRISIS STALLED THE INITIATIVE?

As of March 2020, it appears as though the Victorian Government stepped in AGAIN to save The Overland, in the absence of any support by the South Australian anti-rail Marshall Government.  But there is a catch at the moment, which has de-railed the initiative for the immediate future.

SARRA understands that the Victorian Government has extended its funding for The Overland to the end of the financial year - but with the closure of State borders due to COVID 19, all cross-border trains run by Journey Beyond Rail- JBR (formerly Great Southern Rail), including The Ghan, the Indian Pacific AND The Overland, have been cancelled because of the current crisis.

SARRA is also led to believe, that prior to the COVID crisis, V/Line Victoria was in negotiations with JBR to take over The Overland so that the service would continue into the future.  COVID has cruelled those plans for the moment - and we can only hope that when the COVID crisis is over, those negotiations will continue.  Time will tell - stay tuned.
AS SARRA HAS SPECULATED, THE VICTORIAN GOVERNMENT HAS SAVED THE OVERLAND!

Persistent strategic leaks to SARRA have had it that the Victorian Government would not abandon The Overland service (see stories below) - and our informants have been right!

Late today (Tuesday December 11, 2018) the Victorian Public Transport Minister, Melissa Horne, announced that the Victorian Government would provide the necessary funding to guarantee the future of The Overland into the future, describing it as an ‘Australian rail treasure’.

Thank you Victoria - that’s what mates are about! We South Australians who care about The Overland service loudly applaud you! We thank you for funding this iconic service which connects our two great cities. 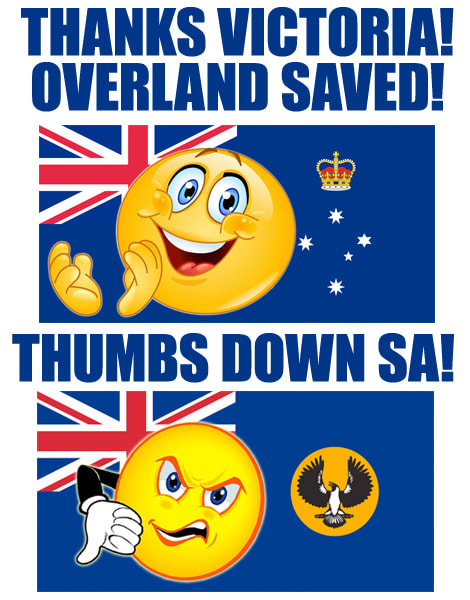 The Marshall Government STANDS CONDEMNED for its refusal (a) to fund the service, and (b) have the absolute temerity to say that the Victorian decision (according to Transport Minister Stephan Knoll) was... “welcome news that the Overland service can continue without being subsidised by South Australian taxpayers.”  WTF? 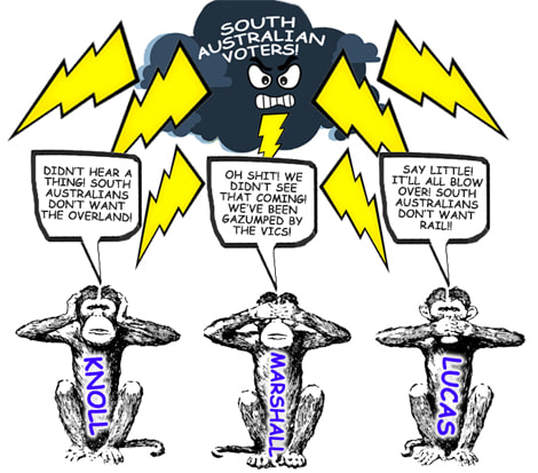 What parallel universe does this Marshall Govt live in?? This is a total embarrassment to SA and only confirms that the Marshall Government is for the ‘long drop’ at the next Election. SARRA is sad to say that, but this government has blatantly illustrated that it IS NOT LISTENING to the people of SA, and particularly not listening to regional and rural South Australians over rail issues. SARRA expected much better.

To SARRA’s supporters....please send your thanks to the Victorian Government - and as we’ve said here before, condemn the SA Government for its abject failure over this matter, and MAINTAIN THE RAGE over this! Let your local MP know of your outrage and embarrassment that the Marshall Government does not - and refuses to listen - to the electorate regarding rural rail services in SA!

ANNOUNCEMENT IMMINENT - THE VICTORIAN GOVERNMENT TO PICK UP ALL THE TAB TO KEEP THE OVERLAND RUNNING....?

Following SARRA’s comments last week that the Victorian Government was looking at funding the $300,000 the Marshall Government refuses to pay to keep the Overland running, we believe that Victoria will indeed provide all the funds to keep the vital train service operating.

We further understand that an announcement by the Victorian Government is imminent. 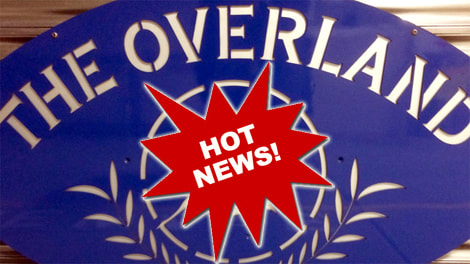 The SARRA team of volunteers have been inundated with outrage and a disgust that the Marshall Government has simply refused to pay its fair share of the funding.

Marshall and his Transport Minister Stephan Knoll must stand condemned.

And we’re certain you won’t let them forget this snub to rural rail.  Our Poll, which has been running since our earlier story predicting that Victoria would come to our rescue, more than 94% (average) of respondents ‘strongly agreed’ or ‘agreed’ to the questions we put on the need to retain the service - and importantly some 88% indicated that they would vote against the Marshal Govt should it not participate in the funding arrangements.

We have been hard at work doing what we can in our capacity to make the thousands of your voices heard. We are in contact with various people in SA and Victoria who are huge supporters of this 131 year old service. While we don’t claim to have had any part in the Victorian Government’s impending announcement, we do believe with your voices - and those of our Victorian mates - the ‘Save The Overland’ message has been heard in the highest places...ohhh... with the exception of the ‘deaf as a post’ politicians in the Marshall Cabinet, of course!

Should, as we expect, the Victorians provide the funds to keep the service going, please do what you can to applaud the Victorians’ decision - and tell Minister Stephan Knoll and your local MPs (whether they are Liberal or Labor) how you feel about this.  AND tell them that unless they get their act together and introduce rural rail services more broadly in SA, the pain they’ll feel collectively in the months ahead will make The Overland ache feel like a mere pin prick.....
December 3, 2018
THE ICONIC OVERLAND RAIL SERVICE IS TO END FOR THE WANT OF SA GOVT FUNDING -
FOR WHOM DOES THE BELL KNOLL?

THE OVERLAND train linking Adelaide and Victoria (at this stage) is to end in January 2019 - but with your support, SARRA is not going down without a fight!  The Liberal Government's decision, lead by Transport Minister Stephan Knoll, has created a virtual 'hornets nest' of protest.  Knoll and Premier Stephen Marshall do not know what's about to attack them!.

Are we 'voting wasps' going to bite them in the ass?  YOU BET WE ARE! 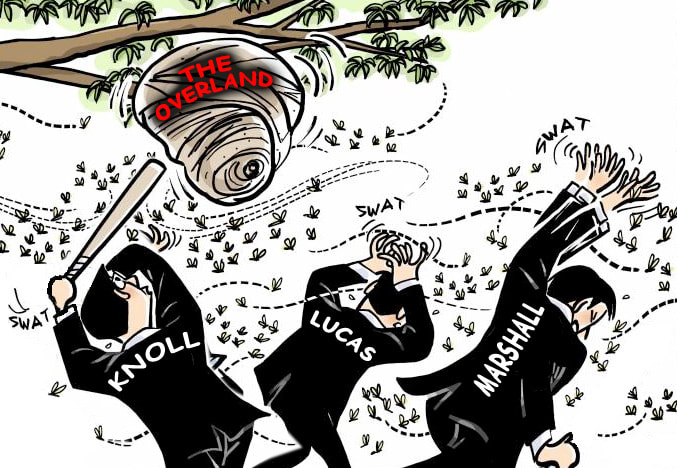 A NEW POLITICAL TRAIN-WRECK FOR THE LIBERALS?
(December 7, 2018)
If the major political derailment over the Marshall Government’s decision not to continue State contributory funding to The Overland was bad enough for the Liberals, are they facing (what this time would be) a new political train-wreck over the issue?

The SA Liberals’ breathtaking stupidity in not continuing The Overland funding - and in the same week announcing a $275,000 grant to prop up the Adelaide Crows Women’s Football Club - beggars belief.

On the one hand the Marshall Government has turned its back on a train service which currently services over 70,000 people per year, (and properly managed could service substantially more, including tourists which this Govt says are fueling a growing ‘boom industry’ for SA) - AND THEN, in the same week, announce similar funding to the Crows franchise to prop up its women’s team?

What brain surgeons are running this Government?

Note we don’t begrudge the women’s footy team its funding - but we DO say that equal funding should be provided to The Overland which not only provides a vital and necessary pubic transport service - but has so much potential to contribute to SA’s economy, far more than an oblong leather ball full of puff’n’wind will ever do!

BUT THE OVERLAND MAY YET ‘BLOW THE WHISTLE’ ON THE MARSHALL GOVERNMENT!

We are hearing interesting rumours that The Overland may not be dead yet! The necessary funding to keep the service operating may well be provided - but we are hearing that at this stage that money will almost certainly NOT come from the Marshall Government.

If what we are hearing is correct (AND the Marshall Government is not involved), this will create a political thunderstorm which, with rolling political thunder, will create the first significant cracks in the Marshall Government’s electoral facade.  It’s a long way to the next State election, but already this Liberal Government, by its total rejection of regional and rural rail (amongst other rural issues), is certainly looking like being a one-term-only administration.

If what we’re hearing is correct about the continuation of The Overland, expect an announcement very soon......
Editorial - THE PARTY IS OVER FOR THE MARSHALL GOVERNMENT

The SA Liberal Government has been fatally stung by its total disregard for the electorate over its public transport policies - a hornet’s nest disturbed which will not settle in the near future unless the Premier steps in and shows leadership.

It’s said in politics that the electorate does not vote in an ‘Opposition’ -- it votes out a Government which does not meet expectations.  This is what happened in SA in March -- a lazy Labor Government which had saddled the State with enormous debt was voted out of office - and the Liberal Opposition was elected to Government with the hope it would provide better stewardship.

Sadly however, the Liberals have been true to their traditional mantra - money first and foremost. We agree that State Debt needs to be controlled - but it needs to be controlled not by the ‘blunderbuss’ but by the scalpel  - the ‘wants and wishes’ of the broader electorate do not always need to be sacrificed on the altar of the almighty dollar.

This ‘economy is paramount’ mantra has always been the soft underbelly of Liberal governments -- money first, ‘humanity’ - and empathy - comes a poor second.

It was to be hoped that the Marshall Government would have learnt to correct this mindset in its vast years in the political wilderness - but by its actions in the past fortnight (driven by rural issues, including trains), it has shown that it has learnt NOTHING about about the need to listen to the people.

The fact that a number of rural Liberal MPs crossed the floor of the House in support of farmer’s rights shines an uncomfortable light on what’s going on behind closed doors on the Liberal Party.

This was followed up by the ‘Minister on Training Wheels’ Stephan Knoll’s decision to pull, what by any measure, is trifling funding to support The Overland train service.  The lack of a subsidy of just $300,000 is breathtakingly short-sighted by a Government which has its roots in rural SA. (And let’s not talk about the shut-down of train services over the Cricket Test weekend!)  Yes, we understand the importance of why this disturbance may be necessary, but the lack of forewarning and discussion with SACA over the matter is just another indication of a Government (or its Transport Minister) totally out of touch with reality.

It also shines a light on the control DPTI has over ‘Training Wheels’ Minister Knoll.  We were concerned when he was appointed Transport Minister, because of his total lack of political experience - and how the ‘ring through his nose’ would be controlled by his Department.  Our concerns are now seemingly justified.

Premier Marshall HAS to step in and reinstate the funding of The Overland.  We are not talking ‘sheep stations’ here! This is a service which links two Australian Capital cities and serves those who CAN’T - or who don’t want to - use cramped planes or buses. Simply, The Overland is part of the government’s ‘social charter’ to the electorate!  In this instance, for effectively just ‘petty cash’, this vital service NEEDS be kept going.

To acknowledge the Liberal’s business mantra, The Overland is also a vital tourist service for international (and national) tourists who spend money along their rail travels.  What IS it about this that the Marshall Government does not understand?

Along with a mighty chorus of South Australian voters, SARRA calls upon the Premier to show true leadership here.  Call in The Minister on Training Wheels and TELL HIM to reverse The Overland decision. SA will be all the better for it!