As Christmas 2019 approached, SARRA (with tongue firmly in cheek) presented SA Transport Minister Stephan Knoll (via Father Christmas) with his own toy train set, as we figured the poor boy never had one as a child and as a result has never been able to bond with trains as a necessary form of commuter and tourism transport.  SARRA presented the Xmas present to the Minister at Parliament House on December 10  - an event which attracted serious media attention.  The fun event underlined SARRA's important message that the SA Government needs to fund, reinvigorate and reinstate SA's regional and rural rail services - an act that will have a marked beneficial effect on SA's rural economy and the health and well-being of regional and rural South Australians.  This page records the gift-giving and other Christmas activities designed to raise Transport Minister Stephan Knoll from his stupor lest he and his government get kicked out of office at the next State Election... 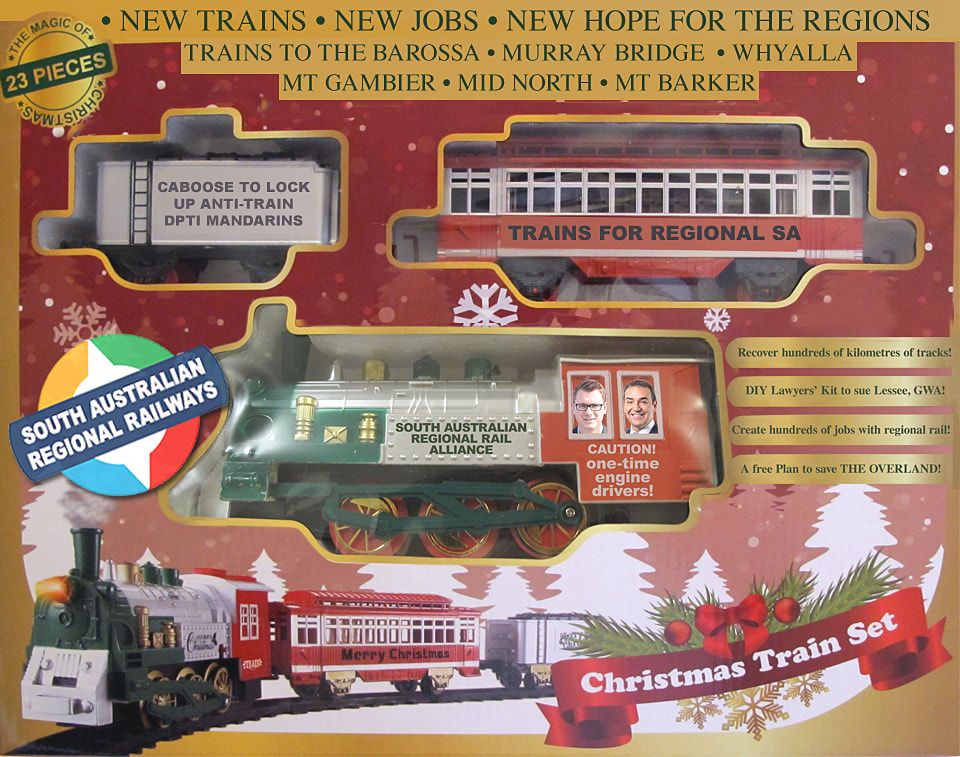 With still days to go before the jolly fat fella slides down our chimneys, Christmas came early to SA’s Transport Minister Stephan Knoll when SARRA handed over a Christmas present of a redesigned train-set to the poor little tyke, who clearly never was given a train-set when he was a toddler, those short few years ago.

If he had, SARRA believes, he would not be as vehemently opposed to the return of regional and rural rain services to SA - after all, who, as a child, didn’t love their train-sets??

So - as part of correcting the Minister’s clearly cloistered upbringing, SARRA’s Campaign Manager Russ Stiggants went to Parliament House today to give the Minister his long-missed toy!

“While our gift to the Minister was a bit of Christmas fun, it highlights a very serious message,” Mr Stiggants said.

There to record the moment (for radio) was ABC 891’s roving reporter Spence Denny, who broadcast the event live into the ABC’s top-rating morning show, hosted by the well-known David Bevan.

In the event you missed it, here’s the live broadcast, below:  Audio runs 7mins 50secs approx.
THE STORY WAS ALSO PICKED UP BY SAS7 NEWS, SA’s TOP-RATING TELEVISION NEWS SERVICE

SARRA’s gift to the Transport Minister was also reported on by Mike Smithson, the doyen of political journalism in South Australia and one its most experienced and insightful political observers.

​Mike caught up with the Minister in Paradise (…yep you read right…!) as he and his boss tucked into the shovels to commence the construction of the new Paradise parking station for the O’Bahn.  Mike stitched in our story to the ‘turning of the sods’ (…let’s not go there!) and in a question related to the return of the Barossa train service, was given a terse, one-line reply. For the Minister, Paradise went to ‘Hell in a hand basket’ very quickly….. See the story below….
​

​IS THE MINISTER ENJOYING HIS TOY?  IS HE SHOWING IT OFF TO HIS FRIENDS IN CABINET? WE RECKON HE IS! 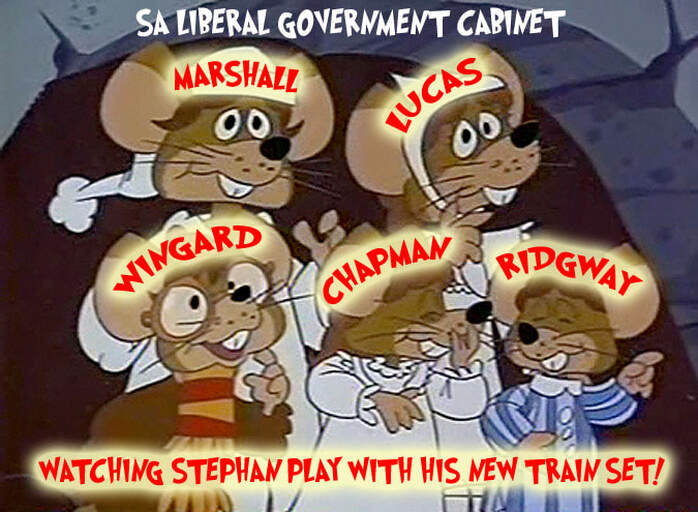 If SARRA had all of Santa's money, we would have given the train set present to all the girls and boys in the State Liberal Cabinet!

But as it turns out, we had to settle for Stephan gathering all his mates around for Christmas drinks... RATatouille...cheese... and Christmas bauble bubblies!

We understand Stephan was keen to show off his toy in action!

​….Hmmm…is this the Minister’s office?  You be the judge... (see the video!) ...We were so excited, we 'jammed' with Hank Snow for this special song to Stephan and his mates!

...AS GRANDMA USED TO SAY, IT’S NOT NICE TO GIVE A CHRISTMAS PRESENT WITHOUT INCLUDING A CHRISTMAS CARD...

Christmas cards are nice to receive - something which encompasses our feelings and something that is put aside in the ‘box of memories’ of recipients for them to look back on as they get …older!

SARRA put together a special Christmas card for our Transport Minister, which was attached to his gift.  We thought you, as our supporters, would like to see it — something too for your ‘memory box’, to look back on …and remember…Stephan Knoll and the Liberals... as they return to the 'political wilderness' after the next State election…

(front and back, then the inside - see below!) 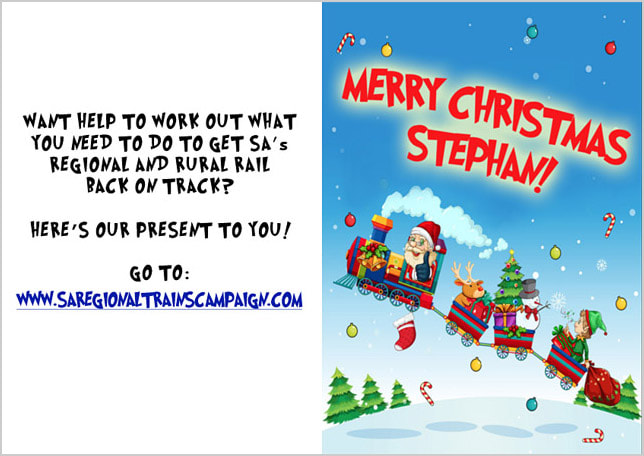 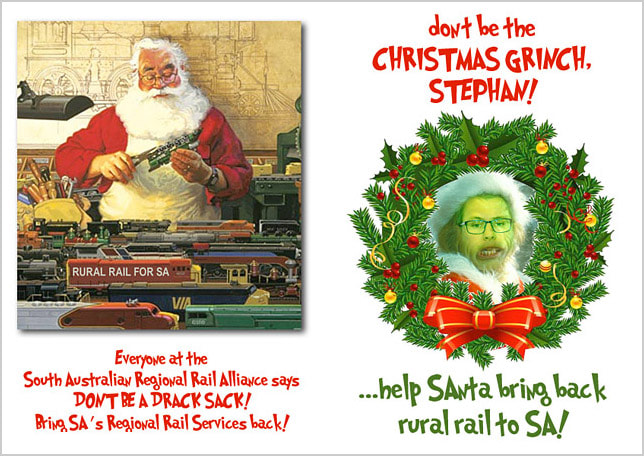 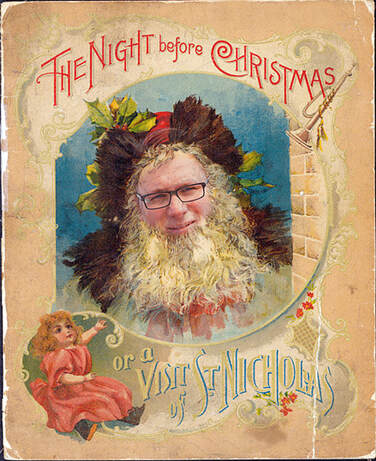 AND SO THE GLOW DOESN’T WEAR OFF, WE WANT THE MINISTER TO BE THINKING OF REINSTATING REGIONAL AND RURAL TRAINS ON CHRISTMAS EVE!

…So we thought it was appropriate to take a look again at the Christmas Classic - ’TWAS THE NIGHT BEFORE CHRISTMAS’ - re-written exclusively for our Minister Stephan Knoll.

Enjoy Minister, and we’re looking forward to big regional train announcements from you, including the reinstatement of the Barossa Wine Train - once the Festive Season is over!

Now, to our supporters, go get yourself an egg-nog, pull up a comfy chair after Christmas lunch, and listen to our exclusive 'TWAS THE NIGHT BEFORE CHRISTMAS' !!

(the audio file is below.  Runs 8mins)

....and for our supporters, their own Christmas card from SARRA....CHRISTMAS IS COMIN' AND THE POLLIES ARE GETTING FAT!

To all our faithful supporters (at last count some 2,500 of you) - not to mention the thousands more who drop by our FB and Web pages periodically), SARRA'S Executive group extends to you the warmest Christmas and New Year's greetings, and we hope the Festive Season and 2020 will bring you joy and happiness (...and regional trains!)

​Here is our Christmas card to you all... (and see the story further below about our Christmas gift to State Transport Minister Stephan Knoll!)  Merry Christmas! 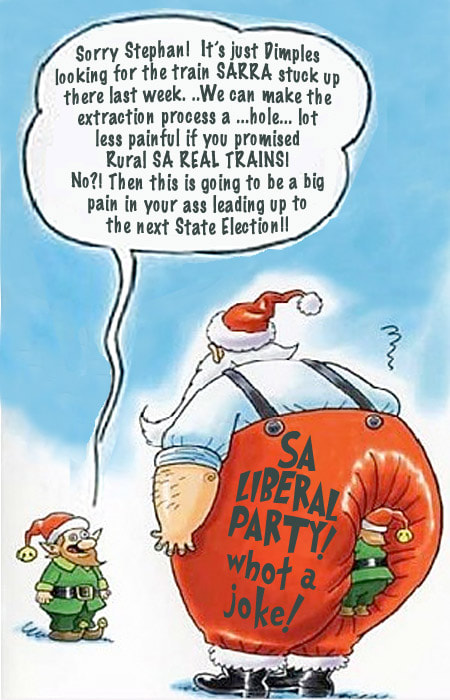 SO AS STEPHAN AND HIS MATES BEGIN THEIR CHRISTMAS BREAK, WE WONDER WHETHER HE HAS A SPECIAL CHRISTMAS PRESENT FOR SOUTH AUSTRALIANS - THE $300,000 SUBSIDY TO KEEP THE OVERLAND TRAIN RUNNING FOR ANOTHER YEAR...

We fear though that Stephan's bag is empty -
​and he'll be remembered forever as the Christmas Grinch!