SARRA asks you to please get involved. In the meantime, draw up a coffee and listen to Paul's interview with our Campaign Manager Russ Stiggants on WOW FM, Sunday 10 July.... (remember to turn up your speakers - interview runs 18 mins approx)
SARRA · WOWFM OnBOARD

BLUE BLOOD IN THE BIN - AND AT LAST, A STATE GOVERNMENT THAT PROFESSES TO CARE ABOUT THE REGIONS....

From a regional perspective, the astounding victory by Geoff Brock over the ‘Big Bird’ Dan Van Holst Pellekaan in the Country Seat of Stuart was one for the ages and showed a maturity by regional voters (which spread to other country electorates) that the Liberals’ ‘born to rule’ days are very well and truly behind us.

That, coupled with the Premier’s decision to not only include Mr Brock in the new State Cabinet - but also to give him some key portfolios Like Roads and Local Government - augurs well for rural and regional SA.

SARRA believes the incoming Premier Peter Malinauskas can start bringing the economic benefits of regional rail to SA immediately, by, in the first instance:

For the moment then....and with the positivity expressed toward regional development, tourism needs and rail re-instatement which played a major part in sweeping Labor into office, SARRA ASKS YOU, MR MALINAUSKAS, TO MOVE ON THIS WITH ALL DUE HASTE.

WHERE IS THE LEASE OF SA's 'ABOVE GROUND' REGIONAL RAIL INFRASTRUCTURE AT...?  JUST SORT IT OUT, PREMIER...!

Since 2007, SA's 'above ground' regional rail infrastructure has been under Lease - a Lease which states unequivocally that SA regional rail lines must be kept in operational order such that trains could run in the lines ...'within a fortnight's notice'.

As can be seen in the pictures above (and in our 'Gallery' click here to view) the lines lay in ruins.  SARRA has long asked governments to enforce the Lease - but has only been met by stone-wall silence.

Complicating matters is that the Lease was entered into with Genesee Wyoming Australia (GWR), which ultimately sold out to One Rail Australia (ORA), which (at March 2022) is in the process of being sold to Aurizon. That deal should have been done by now but has been paused by the Australian Consumer & Competition Commission (the formidable ACCC).  The reasons why the ACCC has not rubber-stamped the deal remain a mystery.

Where the Lease sits in all this is equally a mystery, despite the efforts of SARRA and others to have revealed whatever the current arrangement is.  In any event, SARRA is led to believe that legal action can be taken against the current entity which leases the above-ground infrastructure and/or against the original Lessee.  By enforcing the Lease, the cost of restoring SA's regional rail infrastructure would be (properly) met by the private-seftor Lessee and NOT by the South Australian taxpayer.

​SO, MR MALINAUSKAS, PLEASE TELL SA TAXPAYERS JUST WHAT IS GOING IN AND WHAT ACTION YOUR GOVERNMENT IS PREPARED TO TAKE ENFORCE THE LEASE.  We ask you to note that Geoff Brock (now your Minister of Roads and Transport) very clearly undertook to reveal the current state-of-play regarding the Lease should he be in a position to do so, which, now, clearly he is.

SARRA ASKS YOU BOTH TO FOLLOW THROUGH ON THAT UNDERTAKING ASAP.

In the lead-up to the election, the Labor Member for the Gawler-based Seat of Light, Tony Piccolo (and also self-titled 'Duty Labor MP for the Barossa') committed the incoming Labor government to a 'study' into re-introducing a Barossa Tourist Train on assuming office.

At the time, SARRA made the point that any incoming Labor Transport Minister would not be able to get into his Ministerial Office due to the pile-up of reports into the Barossa Train commissioned by former governments, most latterly reports drawn up by the (now kicked-out) mandarins of the Dept of Transport who blindly pressed ahead with cutting a section of the line at Kroemer's Crossing between Tanunda and Nuriootpa, reports which fed the anti-rail bias of the (then) Barossa MP, Stephan Knoll.  As history records, Knoll fell on his political sword due to the pressures brought on him by the Barossa Train matter (and other issues) and is no longer an MP.

During that fight over Kroemer's Crossing, a highly-detailed report was produced by a qualified rail engineer which stated that the Barossa 33-kilometre rail-line could be brought up to 'heritage' standard by the replacement of 1 in 5 sleepers from Gawler to Tanunda for plus/minus $1.5m. (That report was presented in 2020, so let's add a further $1m to that cost, just to be in the 'safe' side.......)

This work would allow a train to run at reduced speed (+/- 25kph) through the Valley – which would be ideal as the BTT would be positioned as a ‘slow tourism’ offering, allowing passengers to ‘savour’ the vistas of the Barossa as the train proceeded at comfortable speed.  As for rolling stock, SARRA supports re-purposing the use of refurbished 3000 class trains, soon to be made redundant when the Gawler line electrification is complete.

A further upgrade of the Barossa Line for freight and daily-commuter services could come later - but in the meantime, Barossa tourism would reap the benefits of this 'heritage' fix within months, if the new government's 'will' is truly there.

A COMMUTER TRAIN TO THE ADELAIDE HILLS AND MT BARKER

In the lead-up to the State Election - at a time when a solution to the massive road-commuter disaster from Mt Barker along the South Eastern Freeway has being played out - the highly regarded Spanish train and rail manufacturer, TALGO, announced it was that it was willing to fund a $2.5m trial to test the feasibility of train services to Mount Barker.

With a long history of supporting the development of train services worldwide, TALGO says it was working in partnership with former SA transport department chief Luigi Rossi and aerospace engineer Edwin Michell – and said it would fund the viability trial at no cost to the State Government.

According to The Advertiser late in the afternoon of March 8 2022, TALGO’s Head of Business Development Jesus Rodriguez said the funds for the trial would be obtained via Fondo para la Internacionalización de la Empresa, a grant scheme managed by the Spanish State Secretary for Trade.

Mr Rodriguez said however that the SA Government would need to provide written support for the trial – and with the State election just around the corner, SARRA notes that Labor’s Transport Shadow Minister Tom Koutsantonis said Labor would back the trial if elected to government.

Since then, Mr Koutsantonis has announced that those discussions have begun.

WELL DONE, LABOR GOVERNMENT - AND WE LOOK FORWARD TO THE SUCCESSFUL ANNOUNCEMENT THAT THE TRIAL WILL GO AHEAD ASAP.

BUT we also ask that those discussions BE BROADENED to include rail passenger services to other regional SA towns and regions (see our map below).

​Given TALGO's history of rail-development elsewhere in the world, SARRA believes the company would understand the opportunity in front of it. 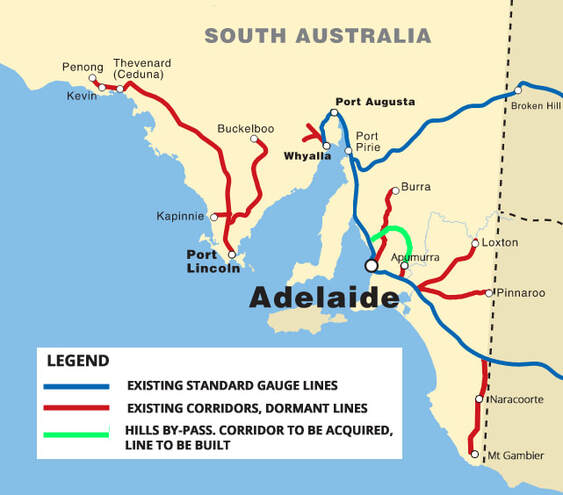 Kilometres of dormant rail lines cross South Australia with the potential to provide convenient, comfortable and much needed access across the regions and to and from Adelaide - but the benefit of regional rail continues to be ignored by Government.

These lines, refurbished, would provide much-needed mobility to those who don't drive, those who must attend critical Adelaide-focussed health services, those who could take up growing employment in the regions or those who would love to visit the regions as tourists.

Alongside rail passenger services, re-invigorated rail freight services on these lies would significantly reduce the hundreds of trucks which jam-up, tear-up and kill or maim drivers in horrendous accidents on our regional roads.

Check out our map here.....the lines in blue already exist and are operational. The lines in red represent rail corridors owned by us, the tax-paying public.  As pointed out above, the above-ground rail infrastructure is currently under Lease to private enterprise, which under Contractual Law, must meet the Lease arrangements to maintain the lines in operational readiness.
The line in green - once known as the Globe Link corridor - requires land acquisition and infrastructure provision but this would be cost-effective in the long term.  This plan was proposed by the the Liberal Marshall opposition but was ABANDONED once Marshall took office.

The benefits of this activity to the State would only accelerate growth to the regions which already significantly contribute to the State’s economy.  It must be noted here that regional South Australia hosts more than 95,000 businesses, employs 185,000 people and generates $55,000,000 in gross regional product statewide. This will grow significantly in the years ahead.

​SARRA calls on you Premier Malinauskas - and Minister Brock - to publicly commit to a plan (made public) to return regional passenger and freight services on these lines at the earliest opportunity.