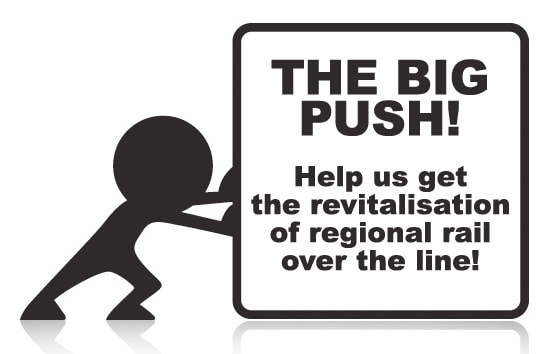 On the day before the ‘issue of writs’ (which formalised the beginning of the 2018 State Election campaign), the South Australian Regional Rail Alliance called on candidates to express their views on the need to revitalise South Australia’s rural rail system, via our 'pollies' poll'.

Only a handful of those seeking our votes on this issue responded directly by our deadline of February 16.  [Note: Our poll took in those candidates who announced their intent to stand early in the nomination cycle:  we do not claim that every candidate was contacted, but the vast majority were.﻿]

We give credit to those candidates who did express their opinions, and we thank them for doing so.

Those who responded personally were:

In the last two weeks of the SA Election campaign, we ask for YOUR HELP to push candidates to get off their butts and realise how the revitalisation and refurbishment of regional rail would benefit ALL South Australians.

SARRA has been active in raising attention to this issue - and you have all been following our efforts on Facebook and via this website. We thank you for your support. Now we call on YOU to take action as well.  We can only do so much, but with YOUR active involvement, we can collectively make those candidates yet to commit to this good cause know it too!

So - put YOUR voice behind our BIG PUSH!

How do you do that? We need 15 minutes of your time. We want you to contact candidates in your electorate and express your views on this issue.

Here’s what to do:

We suggest you contact candidates for the major parties, the ALP and the Liberals, specifically: Clearly SA-BEST and many of the independents or minor parties support us already (see SA-BEST's Media Release supporting rural rail, by clicking here:

Go to the link below.  This will take you to the ALP’s State Election campaign page. (The page is headed by details of Premier Jay Weatherill, but scroll down the page and you will see the List of ALP Candidates both for the Lower House, and the Legislative Council.)

Go to the link Below:

Click on the ‘read more’ under your candidate’s name: look for the ‘Get In touch’ info on the right of the page.

NOTE however that we have had incidents where one of our supporters put legitimate (and respectful) questions specifically to Transport Minister Stephen Mullighan on the rail issue - only to have them immediately deleted from Mullighan’s Facebook page!  This censorship is to be deplored - and should the same happen to you, please report it to us.

Many candidates also provide email addresses - but we have found that contact by email is dodgy at best:  You are likely to just get an automated response, telling you that the candidate ...”has your best interests at heart...(yadda, yadda, yadda...)” but that’s as far as it goes.  Where we have used email as a point of contact, and got the 'Freddy Feelgood' message, we have had no further response.  That’s not to say you should not try email contact, but be aware that it’s potentially ‘the contact you’re having, when you’re not having contact’.

Where phone numbers are provided, RING THEM!  Again, it’s more than likely the calls will go to an answering service.  If that is the case, just ask that the candidate returns you call!  DON’T tell them why you are calling, just ask them to get back to you.

Which ever way you make contact, try to get through any 'electronic' or 'human' filters that might be placed in your path.  INSIST (nicely) that you want to speak with the candidate direct on this matter.

No matter how you get through to candidates, here’s the message:

TELL THEM you want them to force an investigation into why regional rail lines are in ruin when a Contract exists with the Lessee of the rural lines which states that those lines must be kept in operational order such that trains could run on them within a fortnight of being called upon to do so!  Tell them you want them to force the issue in their party rooms, should their party form government after March 17.

If they try to tell you that it's not an issue for their electorates, TELL THEM that a refurbished rural rail network would create hundreds of jobs across all of SA (including the metropolitan area) and would re-energise rural regions which will be increasingly important to the State’s economy in the years to come.

For further ammunition, check out the rest of this website if you haven’t done so already.

REMEMBER:  In all contact with candidates, PLEASE BE RESPECTFUL.  All candidates regardless of party are trying their best to represent us all (albeit through the ‘lens’ of their respective parties’ policies).  Whether you agree with that perspective is a matter for you, but be polite when stating your views on the rural rail issue.

Got it so far?  Good!  NOW contact your your own network of families and friends, and get them to do the same!  Point them to this page, so they can know how to do it too!

PLEASE, if you support the return of regional and rural rail to SA, WE URGE YOU TO DO THIS!  The more the ‘wheel squeaks’ the more ‘oil’ our politicians need to pour on it to make it work!

(If you wish, share the responses you got from candidates on our Facebook page.  Please remember to be respectful on our page too....report candidates’ responses without resorting to profanities or other abuse. Report their responses honestly.  Any inappropriate responses will be moderated.)